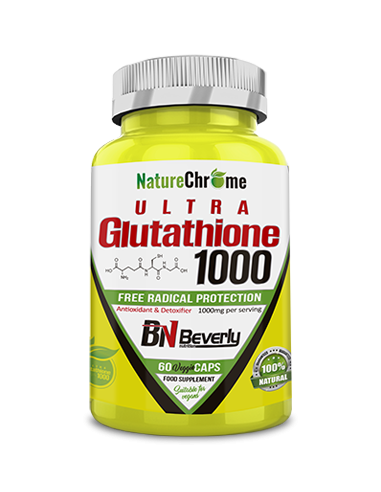 Glutathione (also known as "the master antioxidant") is a powerful substance produced and used by ALL cells in the body. Glutathione has a wide repertoire of clinically proven health benefits.

What is Glutathione (The Master Antioxidant)

Glutathione (also known as "the master antioxidant") is a powerful substance produced and used by ALL cells in the body. Glutathione has a wide repertoire of clinically proven health benefits.

Glutathione is a peptide composed of three important amino acids, a tripeptide that is found inside every cell in your body. Without glutathione, our cells cannot perform their activities optimally. Researchers have suggested that cellular levels of glutathione could be used as a biomarker to determine life expectancy.

Antioxidants are crucial for eliminating free radicals from the body. Free radicals are basically very reactive particles that attack all cells, damaging everything they touch. Glutathione is not only an endogenous antioxidant, it also plays an essential factor in energy utilization, detoxification and prevention of diseases that we relate to aging.

Glutathione does much more than simply inhibit free radicals. It also protects many systems and organs during an illness or from the deterioration that an illness entails. Glutathione has been defined as a "xenobiotic toxicity defense agent," meaning that it protects against the harms of taking drugs, environmental pollutants, or carcinogens.

Glutathione is sometimes confused with glutamine and glutamate because of the similarity in the names. Although the three molecules are related, they are different in composition and function. When you are healthy, all three are balanced and create a delicate dance within your body.

In short, this is the difference between the three:

- Glutamine: the most abundant amino acid in your body, it is manufactured in your brain from glutamate; it has an important role in various anti-injury and muscle repair processes; it is a precursor to glutathione.

- Glutathione (two types, GSH and GSSG): The "master antioxidant"-the most powerful antioxidant in the body that is present in every cell. It protects cells and is especially important for liver health; it breaks down into free glutamate.

- Glutamate (also known as glutamic acid or L-glutamate): Neurotransmitter of mono peptide amino acids in your brain-needed for synaptic activity. You don't need much of it; it's an excitotoxin. (also see monosodium glutamate or MSG)

Glutathione's main function is to protect its cells and mitochondria from oxidative damage and peroxidation. As we age, the body's ability to produce glutathione decreases.

Glutathione is not only an endogenous antioxidant, it is also an essential factor in energy utilization, detoxification, and disease prevention that we associate with aging.

Glutathione deficiency has been linked to:

- Age-related diseases such as Alzheimer's and Parkinson's

- Arthritis, asthma and other inflammatory conditions

Glutathione plays a very important role in the detoxification functions of the liver and in the control of the thiol/disulfide exchange in the cells. The liver increases glutathione production to combat the effects of a high-fat diet.

Glutathione is a molecule that takes care of more than 1,500 functions, it is responsible for our body to function properly. With a glutathione supplement there will be an effect on the whole organism, it will help our organism to detoxify from harmful elements, to deflate, to get stronger, to improve the health in general and to have more energy.

Glutathione and a more luminous skin

Studies have shown that glutathione can increase the brightness and whitening of the skin in healthy women. This is because glutathione stimulates the production of a particular type of melanin in the skin cells, called pheomelanins, to the detriment of eumelanins.

Virtually all lung diseases are caused by excessive inflammation of the lungs. In many of these diseases, restoring glutathione to healthier levels confers protection to these diseases, relieves symptoms, and promotes healing, which supports the idea that glutathione acts as an anti-inflammatory.

Summary of Benefits of Glutathione

- Slowing down the aging process.

Package of 60 vegetable capsules of 500 mg per capsule

Save products on your wishlist to buy them later or share with your friends.